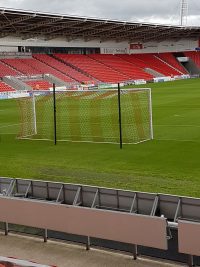 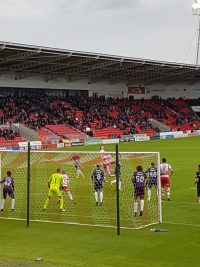 Thanks to James for the pictures of the Keepmoat goal which would not be troubled by the Blues strikers.

James Anchovy made to trip to the happy hunting ground of South Yorkshire.

First Half and Blues are ok, Wrighty shoots at the keeper in the first minute, then Coxy over the bar. Bad news as Harry Kypper has to limp off. Wordy the Poet floats like a daffodil into a meaty challenge to get a yellow and wind up the crowd, who loved him scoring the opener! Big Ox saves Blues several times but the game changes when Doncy score thru Fish’s Shark Marquis to set up a tents finish to the half (that’s as funny as this report will get).

Halfo 1-1, goal was offside says James, and this ref wants a home win…..

Second half Disaster Dahling. Two freekicks, two goals. And then a penalty, it’s now 4-1, and Whiteman has helped himself to an easy hat-trick. James has never been so pissed off at a game. (Plenty of time when you support the Shrimpers young man).Big Ox gets a yellow for nothing, Blues all over the place. Several blatant handballs in the Donny area and the ref bottles them all. Theo should score, straight at keeper! The Blues fans are well angry, shocking ref, team, ground! Then FerdinNados gets himself sent off after the game!

Three players have helped themselves to hat-tricks in one half v Blues, Rotherham’s Moore, Gillingham’s Eaves and now Whiteman. AAAArgh