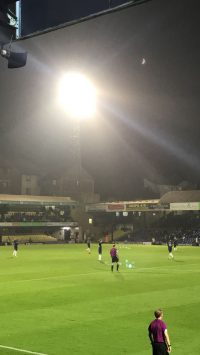 We love a floodlight photo here on Prawnzone, but not as much as we love 3 points! Mr and Mrs Prawn Connery attended their first match as a married couple, and now have a 100% winning record watching the Blues. Fish Walsh and James Anchovy were the bridesmaids.

First half and a storming start had Womble on the back foot, for a full 5 minutes. AFC pack the midfield and stifle the Blues, Uncle Bulgaria had done his homework. It’s a shared first half, Blues need to step it up. Halfo 0-0.

Second half and it’s better from Blues, but Ox has to be smart, then Demi worms his way into the box and GOAL from the Prawnzone man! 2 goals in two home games for Demi! Blues push on, McGash is fouled but refs never give him a pen, his feet are too quick! Harry Kypper is having a good game, James reckons MOTM. Blues see it out for a hard fought, grind it out win.