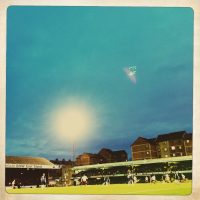 First half and it’s Whitey in for FerdsinNandos as called for by the twitterati, and a great welcome back for Ben Coker. Browntrout goes for Ranger on his own up front….But it’s the Thud who start strong and take the lead after carving Blues open. Fish says that our defence is asleep and need wake up. Wordsworth heads straight at the keeper as Blues try to get back in it but Fish says that the Thud are hardly breaking sweat and we are clueless. Halfo 0-1.

Second half and better from Blues as Ranger, Whitey and Lenny have chances. McGash comes on and crosses for SuperMac to score his 4th of the season. Both teams go for it but Lenny gives away a pen for his second yellow and is off to the stands with Brown. And Wyke gets on our wick with the pen for 2-1 on 90 mins. Rubbish end to a crap day.