Rochdyke Amateur Football Creche were formed in 1922 when the members of Ramsbottom Womens Institute decided to come out of the clog closet and start Wancashire’s first Football Club for “Ladies of a Lesbian Persuasion”.
They played friendly, in fact very friendly games against other Lesbian teams from the area, Oswaldtwistle Thistle, Cloughclit Corinthians, Fish Pie Forest, and Ever Ready Battery United.
Their ambition was to join Division Three of the Football League, which due to league rules, would only happen if they were a mans team. Despite the generous amount of leg and facial hair on show, Rochdyke were refused permission to join, even when they pointed out the high number of girly players at Oldham and Bury.
There was no alternative but to start a mens team, so they looked for a suitable site in Rochdyke town itself.
Rugby league side Rochdyke Helmets came to the rescue with an agreement to share their ground, an arrangement which remains to this day, and in 1930, the Dykes were allowed to join Division Three North playing at the Spunkland Stadium.
They reached the final of the League Cup in 1962, the first club from the basement division to ever achieve this, (the League cup was not a very popular competition in its infancy, and the 1962 competition only had four entrants).
They gained promotion from Division Four 7 years later, but have failed to win anything since, apart from a promotion to League One in 2010, and again in 2014 when 14 clubs voted to award a free promotion to the most effeminate club.
Big girls blouses. 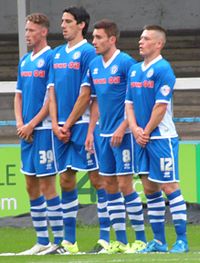