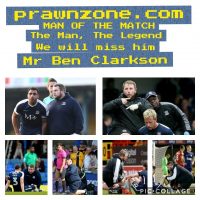 Ben Clarkson spent 19 years at Roots Hall, working through the ranks until he finally became No1 Physio at Southend United!

A fan of the Mighty Shrimpers from an early age, his dreams came true when he became first team Physio and treated all the players, who have all thanked Ben for his expertise and hard work!

2020 and Ben moved on to join Stratford United, and will no doubt be a star at the London Greyhound Stadium!

« Back to SUFC Heroes