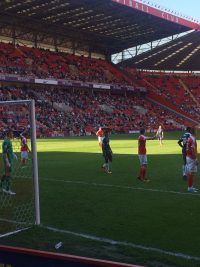 Fish Walsh and James Anchovy traveled to the Valley with 2500 other Shrimpers. Unfortunately, even though it was Grand National Day, Blues just weren’t at the races. Missing Ranger, Lenny, Cokes and the Poet Wordsworth, Browntrout rightly expected the squad to cope.

First half and it’s Prawnzone’s “Shark in the Water” Holmes, a Blues fan, who scores after just 5 minutes. “Awful defending” says Fish. But the Blues are back in it soon after as Johnny Whitebait heads in Timmo’s corner for 1-1. Homes is causing Blues problems as he swaps flanks, but the half fizzles out, Charlton have had just 1 shot on target, Blues 2. Halfo 1-1.

Second half and it’s non stop support from the magnificent Blue Army but it’s non stop panic in the last third for the Shrimpers. Charlton hit the post, Blues have chances but it’s FerdsinNandos missing a cross for JFC to head in, maybe off Thommo. Blues push forward but it ends 1-2. 2,500 glum Shrimpers trudge off home as Blues slip to 7th.