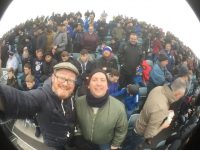 A quartet of Prawntroopers took an epic journey by land and sea to arrive at the Land of Cnuts to stand on a designated piece of scaffolding. Pix, comments and angst from Fish Walsh, Scott Conga, James Anchovy and Paul Codpiece.

First half and it’s all pretty tedious, Blues not really pressing the Gals who haven’t won in 2016. Then the rubbish ref, who is playing to the home crowd, gives a soft pen after originally waving it away. 1-0 Gills, jammy Cnuts. Gals amazingly score again when the ball bobbles off shins, studs and errant wind-blown crisp packets and is bundled in again by jammy Cnuts x 2. Then the ref is talked into the second yellow for Innis by an idiot linesman, the Gals players and the home crowd. 0-2 halfo.

Second half and Whitey and Ranger are on for McGash and 4Tuna, and Blues push on. Theo Rollmop on for the Poet and it’s Ranger who scores on 83 as Blues have the Gals under the cosh. But the referee holds out for a 2-1 win and 1800 Shrimpers quite rightly suggest that the ref worships Onan and has a very strong right wrist.