Prawntroopers Nick Prawnby, Paul Codpiece and Scott Conga braved the chilly air to bring this report from the Den. 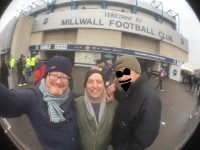 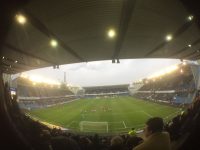 Good day out, meeting Millwall chums on the way, in the pub at Surrey Quays.

First half and an unchanged team in that cherry kit are doing ok, roared on by 1400 Shrimpers, but Millyawn have chances. So called top Premier referee Marriner struggling to keep up. Big Willy Atko goes in a bit late for a yellow card…. no! twat Marriner gives him a RED! Blues/Pinks down to ten men but they are doing well and halfo comes 0-0.

Second half and Millyawn are applying pressure, not helped by Mr Marrinade who has changed into a Millwall kit. A far post cross to the midget Ojamaflip and Demi is outjumped, 1-0 Millyawn. Finally the home fans start to wake up. Browntrout tries subs and Theo gets a yellow for a soft shove on giant Millyawn defender. McGlash burns past a Yawn defender, and is brought down in the box – NO PEN says Marriner-Harris. Blues/cherrys have a go but Yawn hold out for the win.