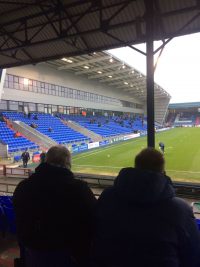 Our new roving reporter James Anchovy reports from the MinimumWage Stadium, Oldham. The highest and coldest ground in England no less.

First half and it’s great to see the Power Ranger starting. Ox saves well, but it’s the Power who turns and scores on 18 mins. 1-0 Blues/Pinks! We’re all over them this half says James, but Coxy has to go off injured, 4Tuna comes on. Fletic try a freekick routine, two men unmarked but shot goes miles wide! Only one shot on target for Fletic. Power gets a knock, might not last out.

Second half and Fletic step it up but Blues stay one step ahead. Power replaced by McGash. Ox has to be on his toes but Blues have chances, 3 corners in a row….. McGash scores for 2-0! Oldham mistake, Gash takes advantage and runs at the keeper, good block but the ball runs under his body and Gash keeps his run going to poach it home! 3414 fans see the Poet have a freekick well saved, Full Time 2-0 Blues!!