Wendy Prawniwell reports from the Glandsfork Park Mega Stadium Complex. After a decent 1-1 at Bolton, the Prawniwells travelled in hope of an upset – and boy were they upset! 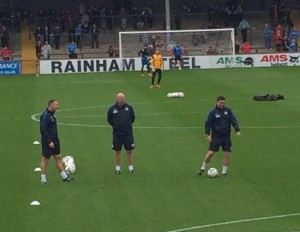 Blues lined up with a new midfield, Coughlan, Maher and Pub Landlord, see picture. But to no avail as nemesis bloody Paddy bloody Madden scores his customary goal, swiftly followed by a goal from Kevin Van Rental. 2-0 and floundering, Browntrout makes 3 subs at half time. Kipper, King and Soko are replaced with Cokes, S Mac and J Mac. Blues have a go but Morris dances through to score then late on it’s Woody Smalldick volleying in for a mere 4-0.

We give up and leave before the end – we NEVER do that! It was dreadful, agonising to watch. Hopeless! MOTM definitely Ryan Leonard, ran his socks off, shooting at goal, crosses into box. Where’s the strikers?