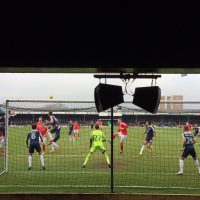 The Mighty Shrimpers made it a not-so-unlucky 13 games unbeaten with a point against the reviving Athletic. Reports and pictures from Fish Walsh, Wendy and Jerri Prawniwell and Scott Conga, in front of a 10,000 crowd.

First half and it’s Smiffy with a smart save from Shark in the Water Ajose, and Mclaugh-in sends a screamer just wide – Jerri says “What a shot! Steve nearly put a hole in the net!” Smiffy saves again before Coxy controls and fires in! 1-0 Blues! Smiffy yet again with a save, Reds keeper save from the Poet. Halfo 1-0 Blues.

Second half and Smiffy yet again saves well, McLaugh-in hits the post. Smiffy saves another shot, Reds hit the bar. Power ranger on for Coxy, but 4Tuna looks knackered. Wendy Prawniwell notes that Lenny is working overtime as usual. S Mac off injured, J Mac on. Big Willy Atko and 4Tuna go close, but it’s Crafty Crofty with the equaliser on 89mins.