Fish Walsh and Tom Crabcake report from a chilly Salop, with 230 other mad Shrimpers. Two changes, Barney and Digger out, Hunty and Moons come in. Shall we let Shrooz win to drop Col Ewe further in the mire?

Second Half and Mango strikes for the Melons! 1-1 47 mins. Shrooz on top now, Timmo on for Hunt, gets a second yellow, Timmo OFF! Steve McQueen replaces John Wayne-Payne. Loza on for Moons, then 79 mins, Atko to Loza, across the goal – HENDERS 2-1 BLOOZ! Shrooz push on, Blooz dig in, BLOOZ WIN!

Fish Walsh and Tom Crabstick’s Man Of The Match is Big Willy Atko! 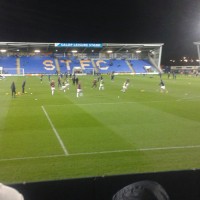 Blues go snooker loopy with a ten men team after bendy officials try to frame us, must be in Shrews pocket! Over 200 Blues fans were enough for a halftime cue for loo. Hendrie’s trick shot gives us the 2-1 cushion we require. Blues put up a real good fight and SUFC snookered Shrews tonight. A BIG BREAK for Blues!