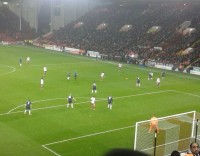 Fish Walsh has traveled to Bramhell Lane thanks to TZ coaches, and wet his whistle with a pre-match pint (shock) and predicts a 0-2 defeat! (shock shock)

First Half and the Super Blues have a dream start on 29 with Lenno shooting home from outside the box via the post1-0 Blues! Just 3 minutes later Payney scores for 2-0 Blues! Disaster for the lads when a corner isn’t cleared and Baxter stirs the soup and scores for 1-2! Then steel yourself, another corner not cleared and Collins books a goal – equaliser 2-2!

Halftime and Fish Walsh partakes a cup of a bulls-arse broth and declares that the second half will be tough!

Second Half and as predicted it’s all Sheffield Saturday and they hit the post 3 times, rubbish shooting. Atko gets the best chance and he blasts over the bar. Full time 2-2.

A good point which most people would have taken before the game. No atmosphere from 18,000 of the home crowd, but over 1,000 noisy Shrimpers cheer on their team.